With our holiday fast approaching next weekend I have began the annual panic about what we still need to buy, to do and worst of all, to pack. I have spent the last few days desperately clicking on mail order websites, trying to buy for every eventuality, collecting and returning countless parcels and growing increasingly anxious about that fact that the days are flying by. So today, having waited in all morning for yet another parcel, I thought we would have a drive up to Matalan where I would be safe in the knowledge that it’s all under one roof, no busy roads to cross, no heaving shopping arcades to manoeuvre, no lifts to wait around for with these three little monkeys in tow.

And two hours later, two hours of sheer hell later, I remembered exactly why I hate shopping these days. Gone are the days when a shopping expedition was something to look forward to, armed with a list and a choice of venues for lunch, and in its place is what can only be described as a living nightmare. The most stressful, embarrassing, infuriating kind of nightmare that results in tears, both the kids and mine!

Because it’s hard to remember the days when I could enjoy shopping by myself. When I could simply walk into a shop without the five minute pep talk beforehand, the laying down of the law, the promise of chocolate and ice cream if they would just let Mummy do what she has to do. When I could stand in a queue, waiting for the stupid woman on the customer service desk to get off the phone, without my kids throwing twenty two pairs of mens black sports socks into my trolley or pulling down a tower of DVDs. When I could keep up the pretence of being a, relatively sane, grown-up without one of the kids pointing out that my cardigan has a huge gaping hole in the pocket, that the shop smells of “stinky poo pants” or that the man next to me has a big fat tummy like Daddy Pig. When I could push the trolley like a normal human being without one, or three of the children, screaming blue murder because I had dared to touch the trolley and then, to avoid a scene, had to resort to an awkward ‘hip shuffle push’ in the pretence that I wasn’t actually touching the trolley at all and that my kids were, indeed, steering it themselves. Right into the heels of the man infront…

I can only dream of a time when I could try on clothes without the constant screech of, “Shut the curtain!” as the kids flashed my (mismatching) bra and knickers to every passing shopper, when I could leisurely decide which dress to buy without having to get changed at lightening speed while shouting, “Get your head out from under there!”, “Do not press that buzzer!” and, “The next person to touch that curtain is in big trouble!!”. When I could look at new underwear without the kids screaming, “Boobies!!” while they pulled 38DD bras onto their heads, thrust their arms through the straps and shrieked, “My boobies are bigger than yours!” to every passing stranger. When I could wander down the aisles without the kids swinging from the rails, grabbing at clothes, launching themselves on the floor and screaming, “Can I have this?” on repeat, with an uncanny ability of homing in on every pink, sparkly, tacky looking item of clothing, jewellery and hair accessory.

It’s impossible to remember a time when I could make eye contact with a perfect stranger in a shop without them feeling the need to tell me, “I feel for you love!” ,”We’ve all been there,” “It does get easier!” as they give me a sympathetic smile, a pat on the arm and a frosty glare at the kids. When I could bend down to try on some shoes without one of the kids whacking me on the back of the head with a heavy duty, pink, glittery sunglasses case, so hard that I was tempted to whip out my phone and Google symptoms of concussion right there and then. When I could turn my back, just for a moment, and not have to worry that the children would scarper, in three different directions, pelting it down the aisles until I finally found them destroying the display beds, tucking themselves in under the covers and telling me, “We were tired, we just needed a nap!”. And my first thought had not been to berate them, or to snatch them down with shame, instead I had merely thought how inviting the bed looked, how lovely it would be to climb in beside them, lay my head down on the pillow and grab even just a moments sleep!!

Remember the days when a shopping trip didn’t result in you contemplating whether Matalan sells tequila, when the smirk of the cashier as she tells you, “That’s why I stopped at one!” makes you want to resort to physical violence, when you place your children into their car seats and thank the Lord that they are finally contained. When you could simply get into your car without launching into a twenty minute lecture on how to behave in public, bringing out the big guns of, “Just you wait ’til Daddy gets home!”, desperately trying to  ignore the chorus of, “But I wanted that unicorn handbag!!!”. Remember a time when a shopping trip didn’t result in pathetic, self indulgent tears on the drive home, eating two Snickers bars back to back, turning the radio up full whack to drown out the howls of, “But I want to be a good girl now!!” and wondering why you even bother leaving the house some days? 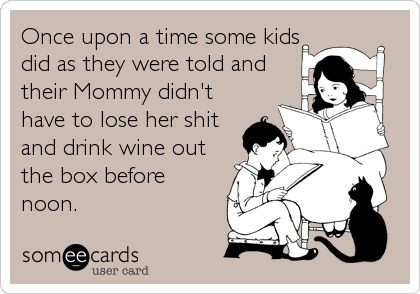